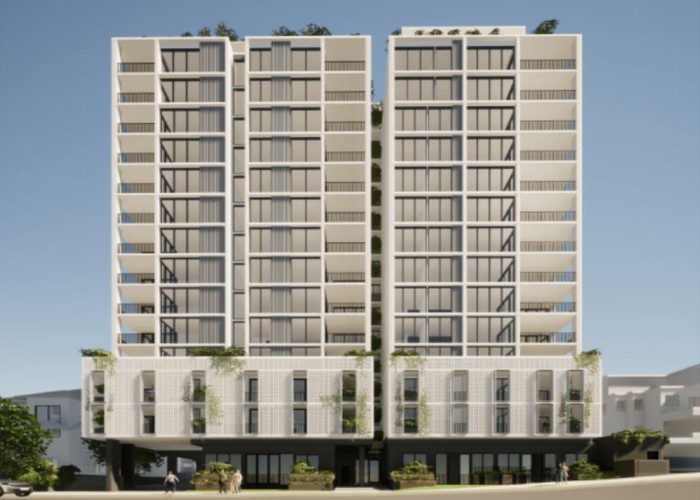 Mosaic Property Group, known for developing boutique residential properties throughout Brisbane, has lodged an application for a third tower in Toowong.

Based on proposal (A005790548) submitted to Brisbane City Council, Mosaic is planning to build a 14-storey tower with 101 units at 24-28 Lissner Street, consisting of 67 two-bedroom units and 34 three-bedroom units.

The third residential tower would also include a 540sqm rooftop communal garden with a pool, gym, and bbq area; and two levels of basement parking and a partial ground level car parking area with a total capacity of 139 resident car spaces and 16 visitor car spaces.

The 2108-square metre site is currently occupied by the three-storey Toowong Inn and Suites, which will be demolished in the first quarter of 2022 once the development is given the go-ahead.

“This immediate area is controlled by the Toowong-Auchenflower Neighbourhood Plan Code which assigns precincts / sub-precincts as well as building envelope provisions such as height,” Mosaic stated in a planning report.

“The neighbourhood plan identifies the subject site and all of the land on the northern side of Lissner Street in the Memorial Park precinct allowing a height of up to 8 storeys based on a minimum site area of 1000sqm. The same height allowance applies to the land directly to the north, on the southern side of Augustus Street,” the planning documents read.

According to Mosaic’s managing director Brook Monahan, this is going to be the company’s 11th project to the inner-west area for the past six years. Monahan said the company has invested much in the area because of the strong demand for apartments in Brisbane’s inner-west.

Mosaic’s first tower, ‘The Patterson’ is a 62-unit development and has been fast-tracked in 2020 after 90 of its units were sold in just two months; whilst its second tower, Kensington, features 63 apartments over nine levels.