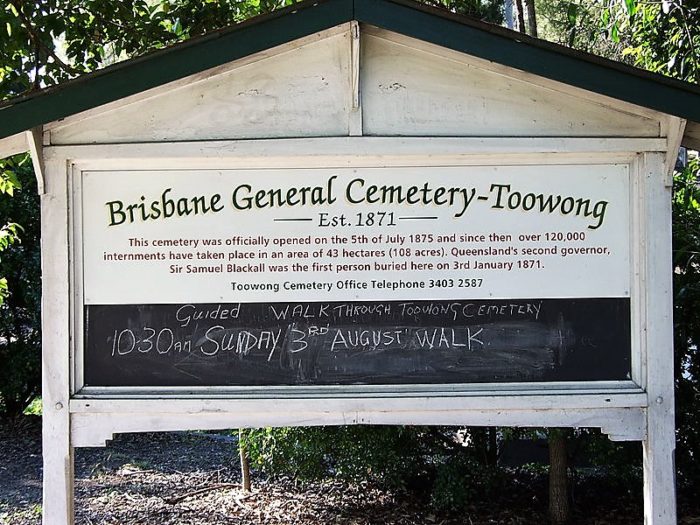 On 21 October 1992, three historical memorials in Toowong Cemetery—Trooper Cobb’s Grave, Temple of Peace, and Caskey Monument—were entered into the Queensland Heritage Register list for their aesthetic, cultural, and historical significance.

His grave was constructed by Andrew Lang Petrie and is the only known grave that was erected in memory of a soldier who served in the South African War. The memorial is made of Helidon sandstone, about 1.9 metres long and one metre wide. On top is a carved sandstone—a rifle, hat with emu plume and badge, and a bandolier along with a marble plate bearing an inscription.

Trooper Cobb’s Grave was cited by the Queensland Heritage Register for its historical significance because it’s a rare memorial of a soldier who served in the South African War.

Temple of Peace was erected by Richard Ramo in 1924, in memory of his four sons. Whilst researchers were unable to confirm, it was alleged that his three natural sons— Victor, Henry, and Gordon—were killed in the First World War. Ferdinand Christian Borell, his foster son, died of self-inflicted gunshot wound. Sitting atop Fred’s sarcophagus is the statue of Ramo’s dog who was “maliciously poisoned”.

The Temple of Peace is a rectangular memorial about 2.7 metres long, 1.7 metres wide, and 3 metres high. The mausoleum features tapered corner pillar, a canopy with corner finials shaped like urns, a miniature mausoleum housing a lamp of remembrance. More than just a memorial, Temple of Peace is a unique monument bearing inscription that expressed pacifist and anti-war sentiments.

The Queensland Heritage Register citation recognizes the Temple of Peace for its outstanding historical significance. Designed and built by Ramo himself, the inscriptions attests to his links to the Industrial Workers of the World–a dissident organisation which sought to unite workers to overthrow capitalism and resist war.

The Temple of Peace is an anti-war monument that is a mix of a mausoleum and Indian temple with eccentric design and emotive inscriptions that express a sense of loss, instability, despair, and hopelessness.

Caskey Monument, the first South African War monument, was erected in 1902 in memory of Lieutenant Lachlan John Caskey who was a member of the 5th Queensland Imperial Bushmen. The memorial was designed by prominent monumental mason William Busby and was sponsored by the State Government.

The memorial features an obelisk on a pedestal draped in a shroud. Below is a quill that serves as a tribute to Caskey’s academic achievements. To acknowledge his sporting interests, the west face features a crossed tennis racquets and a crossed cricket bats on the east. Completing the theme’s features is a football on the front of the pedestal.

The Caskey Monument was entered into the Heritage Register list for its historical importance being the “first known South African War memorial in Queensland and a model for later monuments in this state. The monument provides a unique source of historical information, and the design is important in illustrating the social fashion and attitudes of its era.”