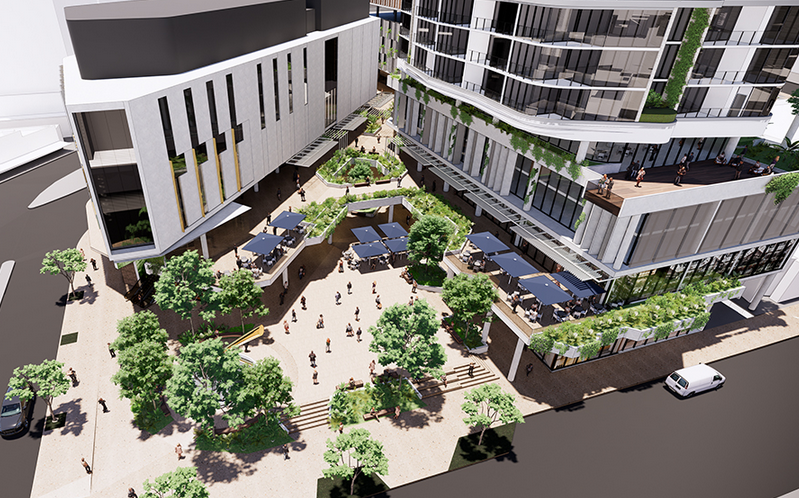 A $450-million development application for a new Toowong Town Centre has been lodged by State Development Corporation and advisory firm White and Partners.

This proposed mixed-use precinct is located at a 8,982-sqm site on the corner of High Street and Sherwood Road, the site of one of the first Woolworths in the state.

Based on an “open street” concept, the proposal creates a central public space which connects Sherwood Rd, High St and Jephson St. The public plaza, which adjoins the Sherwood Rd intersection, will usher visitors into the Toowong Commercial precinct.

Designed to connect public transport routes via train, bus and cycleways, it will also be integrated with the various pedestrian routes through Toowong, to make the site more accessible to the surrounding neighbourhoods.

“Our plans include upgrades to High Street with the building set back further from the street, allowing for a dedicated bus lane for the busy Toowong bus stop. Allowing buses to stop in front of our development without blocking the two inbound lanes will alleviate traffic in the area, especially during peak hour,” Ross McKinnon, Managing Director of State Development Corporation, said

The site sits opposite Toowong Village and the train station, both built in the mid-1980s. Although not designed to directly rival Toowong Village, the developers said it is intended to be “a public plaza which integrates with the existing urban common,” where “the public spaces will form a distinctive sense of place and vibrant retail centre to the Toowong heart.”

The plaza is intended to be used for community activities, small concerts, outdoor dining and food festivals, and other special events.

“We see the plaza as being an ever-changing meeting area – an iconic location that changes from day to night, week to week, and season to season,” Mr McKinnon said.

Overall, the site comprises a five-storey, open-air plaza, which includes a theatre, a 20-storey office tower, and a 25-storey residential tower. The retail component of the development is accessible directly from High Street, Sherwood Road and Jephson Street, where there will be a street-level entry into the centre.

“Inspiration for the design has come from one of the greatest outdoor shopping centres in the world, The Grove Shopping Centre in Los Angeles, which incorporates the best characteristics of a high street in the one development,” Mr McKinnon said.

“Brisbane has a similar climate to Los Angeles, and we believe the open street theme along with the open-air plaza is the perfect combination to enhance the existing Toowong area. Now more than ever, Toowong needs a heart – a civic plaza to give the suburb a focal point the neighbourhood and community can identify with,” he explained.

Mr McKinnon further explained that the company decided not to push through with the three-tower design approved by Council in 2016.

Instead, the current design includes only two towers, with more space to open up the site for more effective public areas. Both towers will be positioned for maximum daylight penetration, to the west and south of the public plaza.

The office tower is designed to be a “multi-functional stack,” twisted every three-storeys and offset to express tower movement in the facade as it rises above the plaza. The design statement describes this movement as reflective of “river bends and the reaches it overlooks.”

Meanwhile, the residential tower, has a slender, iconic form which has been designed to complement the curved language of the commercial tower. Splitting the tower form are two green spines which create communal gardens, situated every three to four floors which according to the design statement, also serve as distinctive “visual markers from the key northern and eastern approaches.”

Approximately half of the site is designated as public space. An open-air plaza which includes a water feature that converts to a stage area constitutes what the designers deem to be “the beating heart” of the precinct.

Once the DA is approved, expressions of interest from commercial and retail tenants will be sought.

“We have developed four projects in the western corridor and understand the Toowong area very well. We’re creating a completely different offer and an entirely new streetscape for Toowong,” McKinnon said.

For more details on the development application, check PD Online Application No. A005434525.