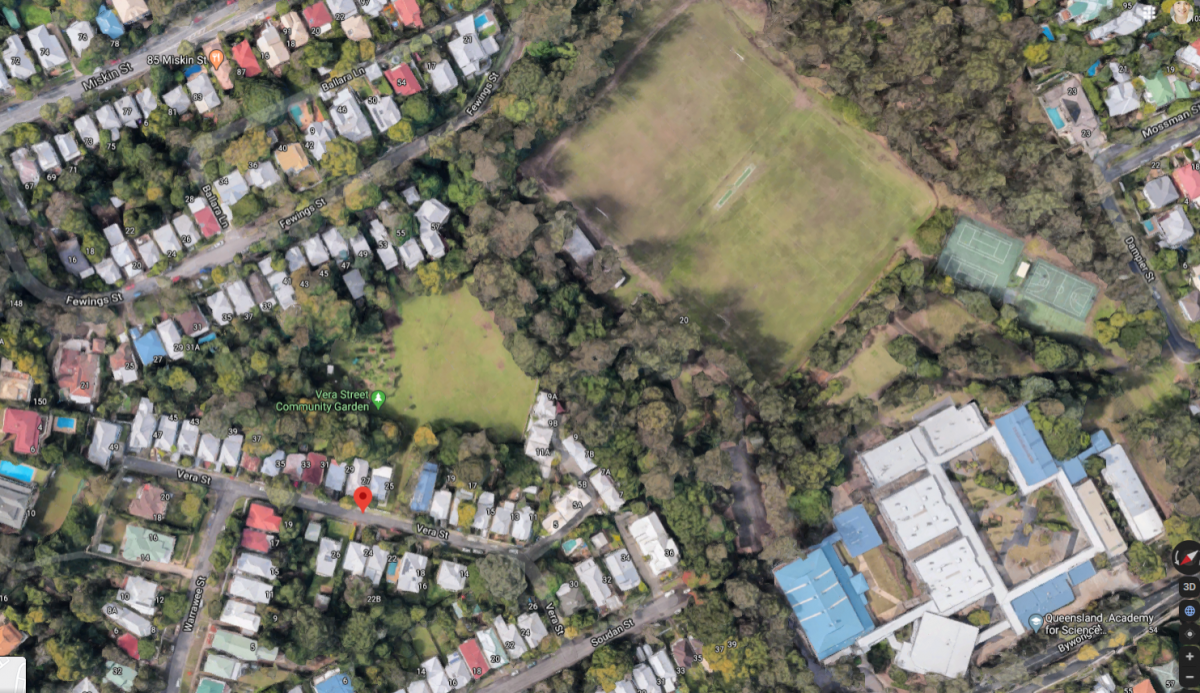 QLD Academy of Science, Mathematics and Technology announced residents can now access the Vera St Common, after it decided to reopen a gate they had previously locked, leading to the Vera St Community Garden, Toowong Creek, and adjacent grounds.

This development came after numerous letters and social media posts from Toowong residents expressed indignation and displeasure at the blocked access.

Vera St Common is popular among locals because of the access it provides to a Council bike path, the community garden and composting area that gardeners frequent, and the surrounding areas where children and dog walkers spend time.

Like the nearby West Rugby Club’s fields, Vera St Common is widely considered to be a community hub, with activities centred on the use of the grounds, usually on weekends or in the afternoon hours.

QASMT controls access to the controversial gate because the land north of Toowong Creek is part of school grounds and sometimes used for sports, although the organiser of the community garden had been given the gate key to let people in after the initial closure was implemented.

In an open letter to neighbours dated the 8th of May 2020 and sent over the weekend, Principal Kath Kayrooz of QASMT advised neighbours they could resume dog walking and other uses as long as they obeyed set rules.

“After long negotiations with the Department of Education Security and Facilities, I am pleased to advise that we will unlock the gate on Vera St this afternoon,’’ Principal Kayrooz said.

Ms Kayrooz explained that reports of breaches of social distancing rules to the DoE regional office led to the decision to block access to Vera St Common.

Recently, the area has been the subject of protests because of perceived environmental ramifications to local flora and fauna, brought about by building works undertaken by the school adjacent to the creek.

In 2019, concerns were raised about the need to fell more than 58 trees in the area, including a 300-year-old grey ironbark. Efforts to save the centuries-old, protected ironbark tree led the government, Council, and the school to agree to move one building 11 metres.

A group of environmentalists led by zoologist Iris Hing also lamented the destruction of the native habitat of indigenous species, such as rare, native amphibians that make their home in Toowong Creek.

Other concerns raised by neighbours about the construction works include increased vehicular and foot traffic; decreased on-street parking, increased noise pollution; disruption on native fauna brought about by the construction; and neighbourhood traffic disruption during event nights at the school.

The protests and some instances of vandalism in the past year have raised security concerns which led to 24-hour security details and a proposed security fence that will be completed by the mid-year.

At present though, Principal Kayrooz has said that residents can again access the park and adjacent grounds at will, provided they abide by social distancing rules, use the area on the north bank of Toowong Creek only during daytime hours, keep dogs on leashes, and pick up after their pets.

A compromise on concerns about the school construction has yet to be made.